Welcome to a website for the ever older alumni of Royal Holloway College who were not only students at this fantastic college at some point between 1965 and 1985 but also remember, if only vaguely, what a wonderful time they used to have.

Some of you may be wondering why the website has two names. The site started out as a hobby site after a reunion for 70's graduates held in 2007 - hence the RHC70s.org - but as with most of our waistlines there was a gradual expansion to encompass those from 'just before' and 'just after' the 70s and then it expanded further to span the period between two big landmarks in the College's history. The first of those two landmarks was the admission of male undergraduates in 1965 into what until then had been a women's college and the second landmark was the merger with Bedford College in 1985 which created a period of rapid expansion which changed the 'village' nature of the college. In recognition of the expanded audience for the site the more inclusive name of rhc65-85 has been adopted to sit alongside the original rhc70s name.

For those privileged to have spent some of the most formative years of their lives at the college it will always hold fond, but sadly, increasing vague, memories of the campus, its buildings and the ever changing community of the student body. This web site will hopefully appeal to those racing towards dementia who now require the occasional memory jogger to recall that they too were once young.
The site will hopefully re-establish old and long lost friendships, gather together anecdotes, memories and photographs that have long been buried in attics and share them amongst a reasonable limited audience. The site will also keep people informed of past and future reunions. To help maintain the dignity of the aging alumni, areas of the site featuring memorabilia and photographs require registration (and that's limited to those who were there at the time). 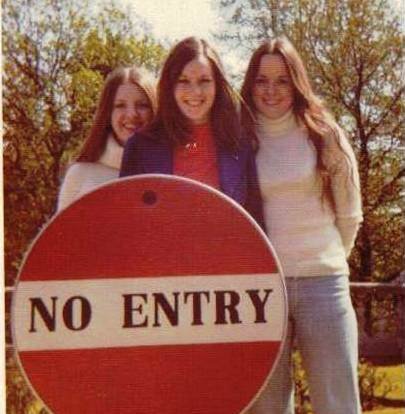 What can you see without registering?

None of the personal stuff

There is some generic information about the college but no details of who was there or their contact details. None of the photos showing people will be visible (other than the one above saying 'No Entry'

You can see outline detail of the next planned reunion, how to buy tickets and how to book accommodation but no detail of who has bought tickets nor the detailed agenda for the weekend.

On graduating we were all so sure we'd not lose touch with friends that had been made but communication in the 60s, 70s and 80s was far more diffiult than it is now.

Once registered you can message any of the other registered members and choose whether to share your contact details with each other.

Alumni Photos from the period

There are thousands of pictures on the site contributed by various alumni, a few are in the public section of the site but to see most of them you need to be signed in.

Why register - some questions answered

If you are an alumni from the 1965 - 1985 period it is the only way you can use the site. There is a mass of information and memorabilia about how the college was during that period and what has been happening to some of the alumni since.

It is also where the details about the next reunion will be available.

We want to protect the photos and information from those to whom it is not relevant and maintain the privacy of the alumni.

How does the site work?

It's a little bit like Facebook, but without the general public, a complete lack of advertising and zero tolerance to anyone who behaves or posts something objectionable.

How is the site financed?

It's a hobby site so the production and research is done to keep dementia at bay and a mind active. It is hosted on a reasonably cheap server - so it's not always super fast, but it is only a hobby!!

There's no advertising, no selling of your data and no sponsorship (but if any alumni want to chip in they'd be very welcome and we may then find a faster hosting provider).

Am I allowed to contribute?

I studied Maths and Computer Science so writing slabs of text in an entertaining way does not come naturally. If anyone wants to correct or rewrite some of the articles - or write some new ones then they will be very welcome.

Old photographs are very welcome and if you have some gathering dust please share them.

And if you find any inaccuracies please add to the comments section under every article, my memory is not great and the gaps in my knowledge are huge.

I think I may be registered but have forgotten my details!

It's an age thing and happens to most of us!!

If you've forgotten your username then you can click on the 'forgot username' link in the log-in bar and get a reminder sent to your email address.

If you've forgotten your password then send an email to jon@rhc70s.org and I'll send you a username reminder and a new password so you can log-in and then reset your password to one you can remember!